EViews 12 features a wide range of exciting changes and improvements (both in Econometrics and non-econometric). The following is an overview of the most important new features in Version 12.

Join Dr. Malvina Marchese for a live and comprehensive introduction to EViews 12. This webinar will give you the boost that you need to get started using EViews 12 efficiently and effectively. Click here to sign up.

EViews is a software package for quickly and efficiently managing data, performing econometric and statistical analysis, generating forecasts or model simulations, and producing high quality graphs and tables for publication or inclusion in other applications. With its intuitive graphical object-oriented user-interface and a powerful analysis engine, EViews blends modern software design with the features you need.

EViews is an easy-to-use, Windows-based statistical analysis package employed worldwide by economists, financial analysts, market researchers, and policy analysts. EViews supports these researchers in a wide range of tasks, from analysing economic and financial data, building models and “what if” scenarios, to conducting research and teaching econometrics, and estimating the impact of new policies or major investment changes. You too can take advantage of the power and simplicity of EViews.

EViews offers the statistical and econometric tools you need for analysing time series, cross-sectional, and panel data. From basic descriptive statistics, measures of association, tests-of-equality, and principal components, to specialised features such as long-run variance calculation, causality testing, and unit root and co-integration diagnostics, EViews offers a wide range of tools for exploring the properties of your data. Our estimation support begins with basic tools such as single and multiple equation linear and nonlinear least squares, ARMA, instrumental variables and exponential smoothing, and extends to more specialised estimators such as Generalised Method of Moments, univariate and multivariate GARCH, Markov switching, non-stationary regression, vector autoregression and vector error correction, and state-space estimation. And that’s just for starters. EViews even offers advanced tools for both stationary and non-stationary panel data analysis. 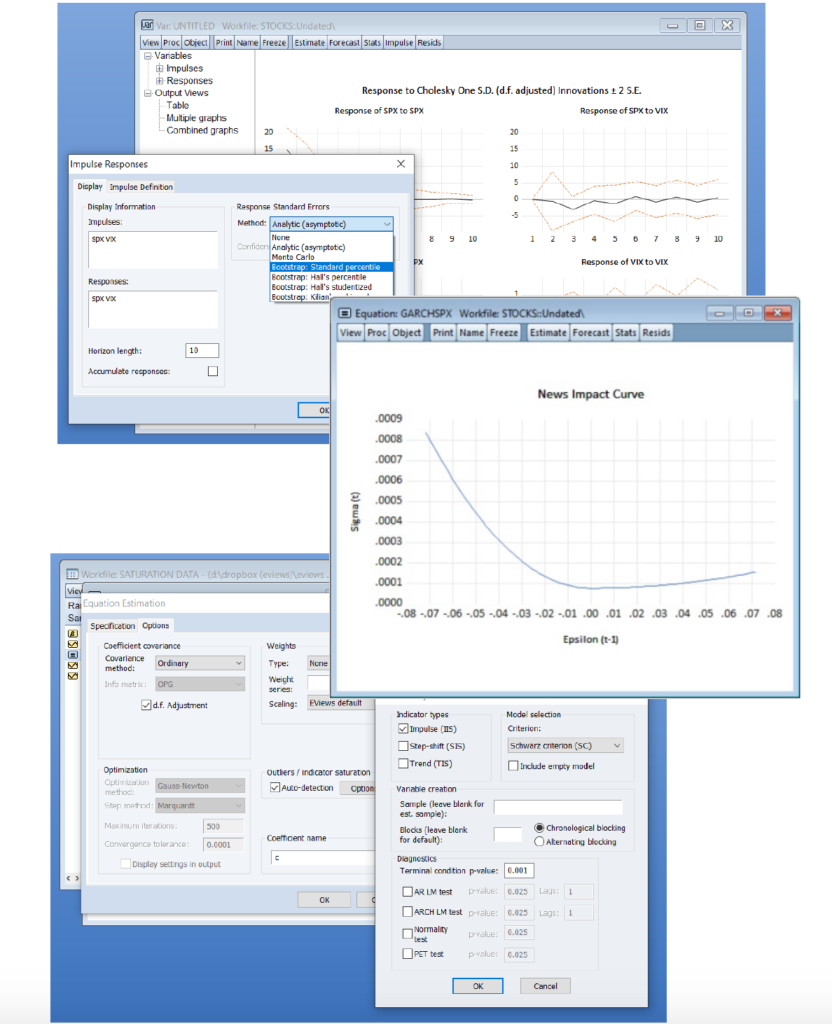